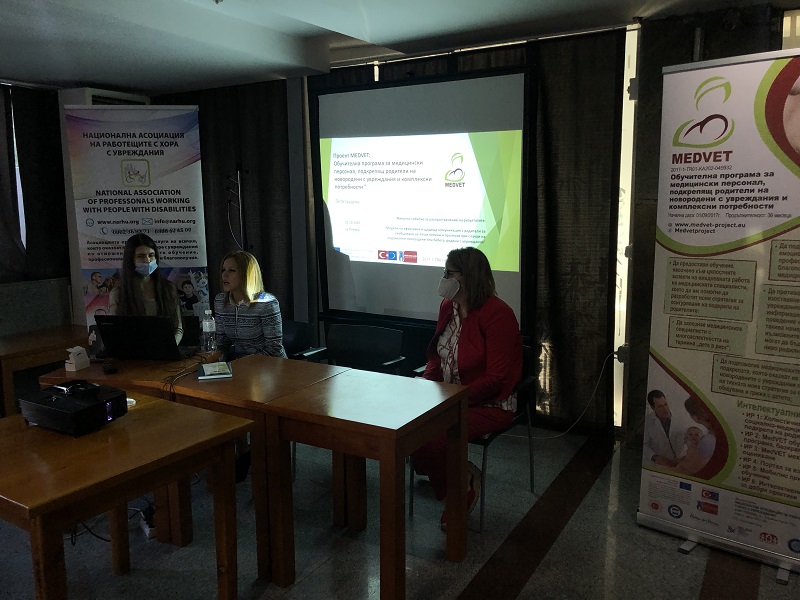 The National Association of professionals working with people with Disabilities organised the final Multiplier event to disseminate the results of the MEDVET project in two parts, on 22/10/2020 and 29/10/2020, respectively. It was organized in two cities – Pleven and Plovdiv, which are the heart of gynecology and neonatology in Bulgaria, because of the large number of private and public clinics, as well as because of medical universities and colleges that educate doctors, nurses and midwives each year. In accordance with the anti-epidemic measures against the spread of covid-19, 22 representatives of the target groups took part in each event. They took place on 22/10/2020 in the city of Pleven and on 29/10/2020 in the city of Plovdiv, respectively. In both cities the program was identical and have included a detailed presentation of the MEDVET project and its 6 intellectual outputs. All training modules as well as the self-assessment tool were described in detail, and the developers of the Peer support portal demonstrated all the steps related to the registration and navigation through the resources.

A special highlight of the program was the presentation of the mobile application for Android and iOS, which aroused great interest and willingness to use.

One of the most emotional moments in both cities was the showing of excerpts from Live books with parents and neonatologists. They evoked real emotions and awareness related to the experiences of both parties in reporting bad news or prognoses. Among the guests were neonatologists and gynecologists, pediatricians, as well as general practitioners, nurses, midwives and representatives of non-governmental organizations and parents’ associations – a total of 44 people. At the end of the working part, everyone agreed that the MEDVET project and its Live books and training materials provide valuable information and raise important issues related to communication models between parents of newborns and doctors and other medical professionals. As the topic is sensitive and delicate, it is rarely discussed in public and not openly enough. For this reason, the participants recommended that similar events to be organized in the future.

The information and photos on this site are the property of NARHU. All rights reserved © 2021

By continuing to use the site, you agree to the use of cookies. more information